Senators Guido Girardi and Baldo Prokurica, along with NGO representatives, celebrated today the creation of one of the largest national whale sanctuaries in the world, an initiative led by Centro de Conservacion Cetacea and Centro Ecoceanos in 2008; they also congratulated the Chilean government for its outstanding role on behalf of the moratorium, whale sanctuaries and governance during the last meeting of the International Whaling Commission.

Senators Guido Girardi and Baldo Prokurica, along with representatives of civil society organizations and public, celebrated the sixth anniversary of the Chilean Whale Sanctuary, one of the largest in the world and that has position the country as a leader in the conservation and non-lethal use of these marine mammals.

The sanctuary was enacted in October 15th, 2008 after an eight month campaign led by Centro Ecoceanos and Centro de Conservacion Cetacea that received the support of 100 NGOs from around the world and the unanimous support of the Government, the Chilean Congress, the Chilean Navy and 99% of chilean people, according to a national poll conducted that year by Adimark-GfK.

The Law for the Protection of Cetaceans also consolidated a policy of State permanently committed to the conservation and non-lethal use of all cetacean species in Chile’s Economic Exclusive Zone and, among others, bans the transport of cetaceans in national territory. Thanks to this last measure in 2011 the Chilean Navy prevented the Japanese whaling vessel, Nisshin Maru, from navigating through a sector of the Drake Channel (Magellan) when it has heading towards Japan after ending its illegal whaling season in the Southern Ocean Whale Sanctuary (created under the International Whaling Commission or IWC in 1994).

The National Whale Sanctuary of Chile also strengthens the national and regional policy of Chile in relation to the sovereign right of nations to use whales exclusively by non-lethal means. As a result, Chile led two important resolutions during the last meeting of the IWC in Slovenia that were adopted by consensus. The first will fortify conservation issues within the scientific committee of the IWC and the second will allow full participation of accredited observers in the meetings of the Commission.

National and International Recognition to Chile Outstanding Work in IWC 2014 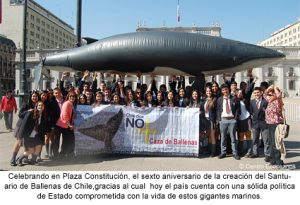 The impeccable work of the Chilean delegation was also expressed after the celebration of the National Whale Sanctuary. Senator Guido Girardi and representatives from Centro de Conservacion Cetacea (CCC), Centro Ecoceanos and No Mas Viviseccion, handed a letter to the Minister of Foreign Affairs, Heraldo Muñoz that congratulates the work conducted by the Chilean delegation in the IWC meeting in Slovenia (11-18 September 2014) that received the support of more than 45 national, regional and international organizations.

Elsa Cabrera, executive director of CCC stated “in this relevant day for the conservation of emblematic species such as whales, the support of Latin America and international civil society organizations to the policies of State promoted by our country, is a solid sign to continue advancing towards the permanent closure of whaling operations which threaten the interests of coastal communities that depend on living whales for their social, economic and cultural development”.

The Chilean State policy, consolidated after the enactment of the National Whale Sanctuary, has additionally reinforce the opposition of political and social sectors to the so-called “scientific” whaling programs in international waters, including the Southern Ocean Whale Sanctuary.

Only in 2014 the Chilean Senate has unanimously adopted two agreements against these slaughters. As a result, in June 24th, senators Prokurica and Girardi, joined by representatives of Centro Ecoceanos and Centro de Conservacion Cetacea, held a meeting with the Minister Muñoz that resulted in advances for the country to conduct a diplomatic protest against the intentions of Japan to continue “scientific” whaling operations despite the historical ruling of the International Court of Justice that ordered its suspension for being illegal. 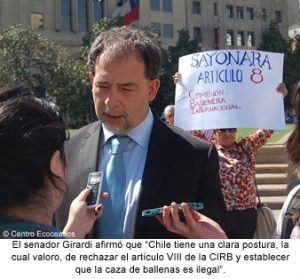 Senator Girardi was emphatic in affirming that Japan`s intentions are “odious and immoral traps to try to justify the mass murdering of whales arguing it is for ‘scientific’ purposes, because today science does not need to kill whales, on the contrary, real science is made with living whales and without hurting them”. Therefore Girardi expects “Chile to conduct a diplomatic protest against Japan for continue killing whales”.

Juan Carlos Cardenas, executive director of Centro Ecoceanos, stated on this matter that “the contribution of Chile and the Latin American countries to strengthen civil society participation and actualizing the work of the scientific committee of the IWC, are strategic steps to ensure compliance with the decision of the International Court of Justice, regarding the suspension of illegal Japanese whaling operations in Antarctica”. Cardenas also noted that since Chile has ratified international agreements against illegal fishing operations “the Navy has the possibility to develop preventive actions oriented to detain any whaling vessels operating in the Southern Ocean”.

In this context, civil society organizations agreed with senator Girardi that the Chilean government needs to make a diplomatic protest against Japan’s whaling interest to return to Antarctica to kill whales, an initiative that was previously announced by minister Muñoz in June.