Senators and NGOs held a meeting with Chilean minister of foreign affairs, Heraldo Munoz, to request diplomatic actions against the continuation of Japanese “scientific” whaling in the North Pacific and the intentions of the government of Japan to return to Antarctica to hunt whales in 2015, after the International Court of Justice sentenced that these operations are illegal since they violate international laws. 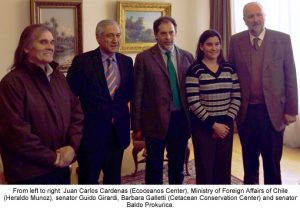 Chilean senators Baldo Prokurica and Guido Girardi, along with representatives of the Chilean NGOs Cetacean Conservation Center and Ecoceanos Center held a meeting with Chilean minister of Foreign Affairs, Heraldo Munoz to deliver the agreement adopted by consensus by the Senate against Japanese “scientific” whaling. The senators and NGO representatives requested Munoz to take diplomatic actions against the continuation of so-called “scientific” whaling by Japan and delivered the agreement that was also handed last week to the Japanese ambassador in Chile, Hidenori Murakami.

The agreement, that received full support from the minister of foreign affairs of Chile, was adopted unanimously by the Senate as a result of the continuation of whaling operations by Japan in the North Pacific and the intentions of the Asian country to ignore the historical ruling of the International Court of Justice that suspended “scientific” whaling in Antarctica because it violates the moratorium on commercial whaling as well as the Southern Ocean Whale Sanctuary.

Senator Guido Girardi added that there are no reasons for Japan to violate international treaties. Girardi explained that during the meeting with Muñoz, they requested the Chilean government to use all existing legal mechanisms as well as all the actions of the Navy to make sure Japan complies with the Court’s decision. The senator explained that “this is a sovereign matter and the country needs to protect these marine mammals from future whaling operations in Antarctica.”

Barbara Galletti, president of Chilean NGO Cetacean Conservation Center highlighted that the killing of whales under so-called “scientific” programs are illegal and indicated that “we are optimistic that the government of Chile will strongly oppose these whaling operations and coordinate efforts with other Latin American countries to guarantee the implementation of the Court’s ruling.”

The director of Ecoceanos Center, Juan Carlos Cardenas, added that “the support of minister Munoz is key for the country to lead coordinated actions with the Latin American and Caribbean governments – known and Buenos Aires Group – to demand the implementation of the Court’s ruling during the next meeting of the International Whaling Commission that will take place in September in Slovenia.”