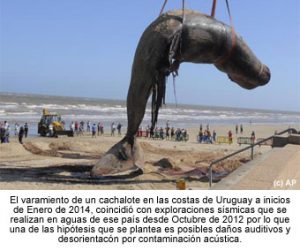 The recent stranding of a sperm whale off the coast of Uruguay has generated a number of questions about the possible causes of death of the cetacean since it did not had external injuries that might suggest a fatal collision with a vessel. One of the hypotheses being considered would be hearing impairment and disorientation due to seismic surveys carried out since October 2012 in the marine environment of the southern country.

Although Uruguayan specialists say it is too early to determine the cause of death of the sperm whale, the hypothesis serves as a reminder of the impacts of a less known but serious threat to marine life: noise generated by seismic surveys.

The increasing search for gas and oil in the world’s oceans is invading every area of the marine environment with such powerful sound waves that can eventually cause death to individuals of various aquatic species.

Ships equipped with the latest technology for the identification of the precious deposits of gas and oil thoroughly scrutinize extensive marine areas through the use of airguns that are simultaneously trigger in order to introduce sound waves into the aquatic environment at very high decibels. The sound waves are directed toward the ground while hydrophone streamers record and analyze the echoes. The blasts or “pulses” of sound are so intense that literally go through everything, reaching hundreds of kilometers below the earth’s crust. During seismic explorations these explosions of sound are repeated every ten seconds and can last for weeks or even months.

Several strandings and deaths of whales around the world have been attributed to seismic surveys. The oil industry defends itself by arguing that there is no scientific evidence to confirm this. However Sigrid Lüber, director of the international campaign Silent Oceans says the opposite: “seismic surveys definitely have a negative impact on marine life. This is not just my opinion. There is a growing body of scientific research showing that noise pollution of anthropogenic origin generates direct and cumulative impacts on fish, marine mammals and other aquatic species.” 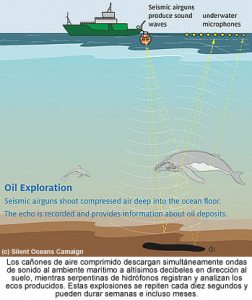 Lüber, who has worked for several years in the United Nations and other international bodies to regulate and reduce the levels of noise pollution in the aquatic environment, adds that at least 37 marine species have shown negative impacts resulting from the use of airguns. “These range from behavioral disturbances, decreased of reproductive rate, physical damage, massive injuries and even death, so their use should be considered a serious source of marine pollution ” states Lüber.

In September 2012 an independent panel of experts concluded that the mass stranding of hundreds of melon head dolphins in 2008 in Madagascar was mainly caused by an echo sounder system of a vessel contracted by Exxon Mobil Exploration and Production Limited.

But not only cetaceans suffer the impacts of these acoustic bombings. Several scientific publications indicate dramatic declines in fish and shellfish due to noise pollution produced by underwater seismic explorations, threatening the food security of millions of people who depend on the ocean to survive.

Some organizations such as the International Maritime Organization (IMO) are developing guidelines to reduce the level of noise generated by boat engines but seismic surveys continue to operate without any standardized international regulatory framework. The absence of significant regional and even national measures allow oil companies to act freely or use different guidelines even when operating in the waters of a same country.

Although it is difficult to quantify the increase in seismic explorations in recent years, in some areas of the world levels of ocean noise has been doubling each decade during the last sixty years. Also, new maritime areas are increasingly attracting the interest of the oil industry, including Latin America. The expansion of seismic surveys in the region and its recognized negative impacts on marine life has led to civil organizations to encourage the adoption of conservation measures for marine biodiversity.

For example, the conduction of seismic surveys in Suriname river systems has raised concerns from various organizations due to the lack of proper mitigation measures and monitoring. In addition, all environmental impact studies are desktop studies, which are not verified in the field, where aquatic mammals such as Guiana dolphins and the Endangered American manatees live. Additionally, the expansion of these operations in the ocean may affect species particularly vulnerable to noise pollution such as sperm and beaked whales. Although oil companies operating in the country claim they implement measures to safeguard the environment, Monique Pool, Chairman of the surinamese NGO Green Heritage Fund (GHF) states that “Environmental Impact Assessment and mitigation measures for marine mammals are voluntary, so it is necessary to have local guidelines, especially since now there is a mix of measures and some of them make no sense”. However, the specialists adds that advances were made last year during a regional meeting held in Suriname of countries from Northern South America, where the participants agreed that regional guidelines proposed by experts from the region is a priority action as there is increased seismic exploration in this ecoregion.

Moreover, in Ecuador the recognition of the negative impacts that these sound explosions have on marine life was evidenced last year in August when the Ecuadorian authorities decided to stop for four months seismic surveys conducted in the Gulf of Guayaquil due to concerns over 300 independent fishermen about the conservation of humpback whales that visit the area for their breeding season and because of increased fish mortality in recent years.

In order to mitigate the effects of seismic surveys carried out in Uruguay since last year, the Organization for the Conservation of Cetaceans (OCC) actively collaborated with the National Fuel Administration (ANCAP ) in mitigation measures for cetaceans. As a result, seismic exploration vessels have to carry two specialize observers on board and stop gunfire whenever cetaceans are observed in a range of approximate three kilometers. Since last year OCC has also been developing a protocol for the rescue and attendance of stranded cetaceans with veterinarians of Uruguay and Brazil. However Rodrigo Garcia, director of OCC, says that these measures are not enough and further work is needed because the recent stranding of the sperm whale coincided with seismic surveys conducted in the country, so the hypothesis raised by several specialists is even stronger.

To help make world oceans less louder and more safer for cetaceans, the Silent Oceans campaign, led by Lüber with the support of dozens of organizations around the world like GHF and OCC, is working to advance in the development, promotion, adoption and implementation of an international regulatory framework aimed to solve significant gaps regarding the rapid and increasing development of seismic surveys in the world’s oceans, By: Elsa Cabrera , director of the Cetacean Conservation Center, member of the Silent Oceans Campaign