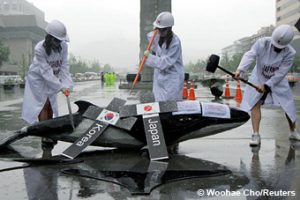 Every action generates a reaction. This could be the effect of the unsuccessful intentions of South Korea to implement in the near future a “scientific whaling” program in the Northwest Pacific that was announced during the last International Whaling Commission (IWC) meeting in Panama.

Although whaling is forbidden by a global moratorium adopted by the IWC, countries like Japan, Norway and Iceland continue to kill whales using legal gaps. While the Nordic nations maintain an objection to conduct commercial whaling operations, since 1987 the government of Japan has conducted two “scientific whaling” programs. By taking advantage of Article VIII of the Convention, Japan grants itself whaling quotas for alleged scientific purposes, killing thousands of these marine mammals in the North Pacific and the Southern Ocean whale sanctuary in the last decades.

The use and abuse of legal gaps by these three nations rendered positive fruits to its whaling interests when in 2008 the IWC headed towards a negotiation process to define the “future of the IWC”. The agreement – supported by a conglomerate of three environmental groups and lead by the United States and New Zealand – proposed de facto removal of the moratorium to grant commercial whaling quotas to Norway, Iceland and Japan. The “scientific whaling” operations of this last country would also be whitewashed by granting quotas to kill whales in the Southern Ocean whale sanctuary.

Global opposition became evident quickly and several countries, including nations with whaling interests, opposed its adoption. Among them, South Korea strongly criticized the proposal affirming that, despite being a whaling nation that complied with the moratorium, it was not considered among the nations benefiting from the whaling agreement.

While the negotiations to define the “future of the IWC” failed and were closed in 2010, some countries such as Russia and Japan, among others, have unsuccessfully tried to revive it in recent years. As a disciplined nation, South Korea must have performed an analysis of the situation only to conclude that perhaps the best way to ensure any future whaling rights would be by reviving their whaling operations in a similar manner as Japan does through its “scientific whaling” programs.

Trying to justify the future implementation of the “scientific” program, the delegate of South Korea in Panama stated that the population of minke whales is recovered and their growing number is negatively affecting local fisheries. This argument was extensively used by the Japanese delegation for several years in the IWC, until various scientific publications showed that it was just propaganda easily palatable to some fishing bureaucrats with competence in the Commission.

Following the footsteps of Japan, the ultimate goal of the “research” program could have been moving towards the creation and implementation of “coastal whaling”, a new form of hunting that has been unsuccessfully promoted by Japan for more than a decade in the IWC and if adopted, would abolish the moratorium on commercial whaling.

However, it seems that the South Korean government did not considered the wave of international criticism and condemnation that strongly impacted its highest political levels when planning its “scientific whaling” program. Australia, New Zealand, France and even the U.S. responded immediately by issuing strong statements in the media and performing high-level diplomatic actions.

The pressure worked rapidly and effectively. On July 12 news about the reconsideration of South Korea to mantain its plans appeared in the media. Five days later an officer of the presidential palace confirmed that after several meetings between the president, the prime minister and the fisheries minister the government discarded the idea to go ahead with the “scientific whaling” program.

The case of South Korea is a call to meditate about the consequences that could have in the coming years the failed negotiation process to define the “future of the IWC.” It also shows that when political will exists the results to stop the illegal killing of whales can be positive and immediate, both to the conservation of whales and the governance of the oceans. An example that should be replicated in order to eliminate the “scientific whaling” operations that the Japanese government continues to conduct with impunity, due to the general inaction of the international community.