The northwestern area of Chiloe Island in southern Chile has one of the most important aggregations of blue whales in the southern hemisphere. Its scenic beauty and exuberant biodiversity has position the area as an international destination of community based marine fauna watching. 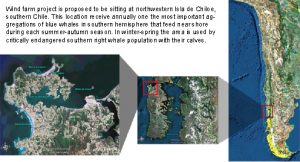 But it’s now under threat by a $235 million dollar mega wind farm project that initially seeks to occupy a sector known as Mar Brava, located in the northwestern area of Chiloe Island, 40km from Ancud, one of the main cities of the island. The project of Ecopower company will install 56 towers of 263ft, generating 112 MW of energy that will be commercialize to the central interconnected system.

The pressure caused by the economic growth of Chile points out the urgent need to incorporate new developments into the national matrix of energy. An option supported by a majority of people is renewable energy. However, this alternative also requires acting in accordance with the laws and regulations in place and taking into account public and private environmental and social responsibilities.

As soon as the project entered the environmental process last October, people expressed opposition in relation to its sitting. This is because it will affect a vulnerable environmental, archeological and social area that also happens to be one of the main natural destinations for national and international tourists in southern Chile.

According to Barbara Galletti, president of Centro de Conservacion Cetacea (CCC/Chile) “the northwestern area of Chiloe island has one of the most important aggregation of blue whales in the southern hemisphere. The whales use these nutrient rich waters to feed each summer”. Galletti added that Peale’s dolphins and the critically endangered population of southern right whale of Chile are also found in the area, recalling that “all these species – in fact, all cetacean species found in Chilean jurisdictional waters – are legally protected and are also recognized as Natural Monuments”.

Because of their complex auditory system, cetaceans are highly vulnerable to wind farms projects. Sound travels faster in the water and looses less energy than in the air. “Noise pollution generated by wind farms could cause from physical injuries to a significant displacement of the marine mammals from their areas” affirmed Galletti. She highlighted that 40 per cent of the Ecopower project would be located along the border of the coastline increasing the possibility of impacting blue whales and other cetacean species found near the coast.

Therefore, it calls the attention that the Environmental Impact Declaration (EID) does not include an analysis of the impacts in the coastal-maritime boundary or the marine environment. This lack of information immediately generated uncertainty about the sustainability of traditional activities such as artisanal fishing and natural based tourism.

Luz Maria Oyarzo, president of the community based and sustainable tourist organization “Ecoturismo Punihuil” called the attention about the consequences that the mega project could have in the consolidation of Punihuil as a national and international destination of responsible marine fauna watching. Oyarzo stated that “the tourist development of the area not only benefit local operators but many people of Ancud as well, that stay in the city motivated by the desire to visit the natural destinations of northwestern Chiloe that is characterized by its incredible biodiversity and great scenic value”.

In relation to the environmental process conducted by Ecopower, Oyarzo indicated that “as local fauna watching operators we are concern that the process to install a mega wind farm in the area does not considers an Environmental Impact Assessment (EIA) and we hope it will be relocated”.

Juan Carlos Cardenas, director of Centro Ecoceanos affirmed that “the project of Ecopower will irreversible prevent the development of tourism in Ancud and the natural areas of Punihuil, Quetalmahue and Lacuy peninsula. Considering that the winds are similar around Chiloe, the project should be relocated towards the interior of the island. Specially considering that the current location in Mar Brava is based only in short term economic reasons that only benefit Ecopower interests”.

The proposed sitting of the mega wind farm project will also affect Quilo, an invaluable archeological site where remains of one of the ancients’ coastal human settlements in America have been discovered. Also a great diversity of coastal birds, including migratory species, wetlands, dunes and several terrestrial endemic and protected species will be impacted by the project.

The relocation of the project seems to be the only solution to minimize negative impacts at a social, cultural and environmental level. Therefore the organizations are demanding that the Environmental Assessment Service rejects the EID for not complying with several articles of the regulation that forces the company to submit a proper an Environmental Impact Assessment.