Latin American civil organizations launched a campaign to alert about the historical ruling about Australia vs. Japan against Japanese scientific whaling in Antarctica that will be taken by the International Court of Justice next March 31st. 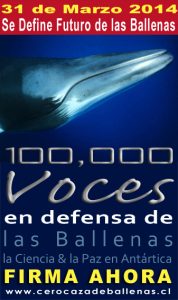 With the aim to alert the public about the landmark decision that will be taken by the International Court of Justice in the case presented by Australia against the Japanese government on the so-called “scientific ” whaling program in Antarctica, the Cetacean Conservation Center of Chile, Ecoceanos Center of Chile, the Whale Conservation Institute of Argentina and the Augusto Carneiro Institute of Brazil launched a campaign to raise signatures to call the members of the Court to order the immediate and permanent closure of these killings because, among others, they violate the moratorium on commercial whaling as well as the Southern Ocean Sanctuary.

The campaign “100 Thousand Voices in the Defense of Whales, Science and Peace in Antarctica” seeks to inform the public about the overwhelming implications that the ruling the International Court of Justice (ICJ) will have for the future of whales, the principles of scientific research of marine species and governance in the Southern Ocean.

Roxana Schteinbarg, coordinator of the Whale Conservation Institute of Argentina, said that “history is being written about the future of whales, each of us – as citizens – must let the judges of the Court know that their decision should be favorable to Australia, putting an end to the farce of “scientific” whaling that is conducted by the government of Japan in the delicate waters of the Southern Ocean. The Court ruling could do what the International Whaling Commission has not been able to achieve”.

Juan Carlos Cardenas, executive director of the Ecoceanos Center added “we call the International Court of Justice to put in the center of this decision the defense of life and peace in our oceans. A favorable ruling towards Japan would mean the elimination of the Southern Ocean Sanctuary, thus opening the way for the resumption of commercial whaling and setting a dangerous precedent that will undermine environmental protection measures in Antarctica”.

José Truda Palazzo, president of the Augusto Carneiro Institute of Brazil added that “Japan’s abuse of an alleged right to conduct ‘scientific’ whaling in the Southern Hemisphere threatens the sovereign rights of the countries in the region to use whale populations – that are a shared resource – by non-lethal means. It is appalling that a hyper developed northern country come and steal our resources in Antarctica without any type of control, so we hope that the International Court of Justice put an end to this crime”.

Elsa Cabrera, director of the Cetacean Conservation Center in Chile concluded “this will surely be the ruling of the century due to the profound consequences that it will have, not only for whales but for the conservation of marine life in general. This ruling will define the way scientific research programs on marine species are conducted and also how conflicts over access to marine resources will be resolved in the Southern Ocean, a key area for many countries in our region”.

For these reasons the promoters of the campaign made a call to the citizens of Latin America and other regions of the world to raise their voice and call the International Court of Justice to immediately and definitively close whaling operations that threaten the conservation of whales and the stability of a unique and special area such as Antarctica.

Signatures will be collected until next March 27 in the Zero Whaling website and will be delivered the day after in the Peace Palace in The Hague, where the headquarter of the International Court of Justice is located. The International Court of Justice is the only court with general jurisdiction and universal character and its decisions are binding and without appeal.